Home The New York Desperate for Light and Warmth, Texans See No End for Winter Storm
The New York

Desperate for Light and Warmth, Texans See No End for Winter Storm 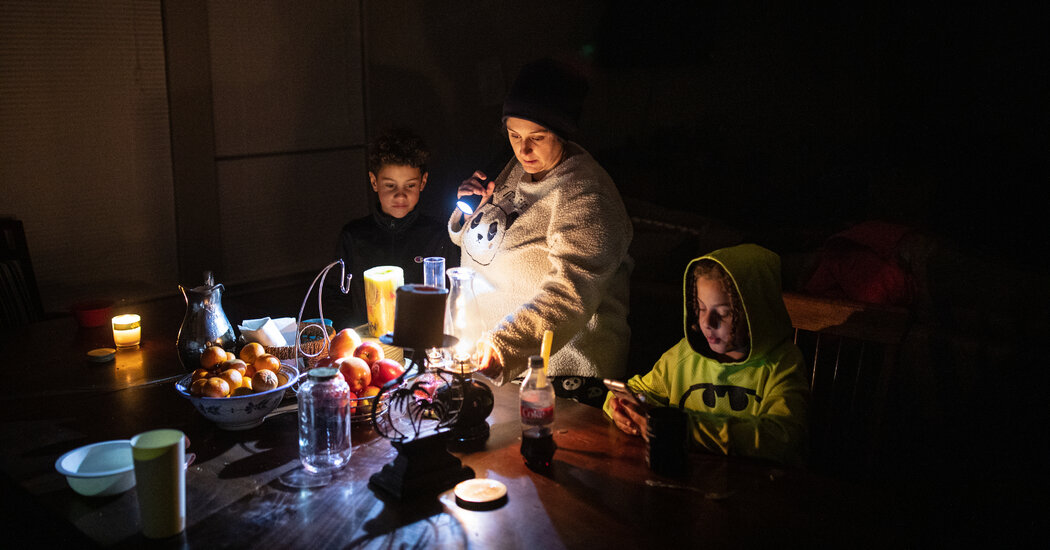 HOUSTON — Halfway through the week that Texas froze over, everything seemed to be in a state of frigid chaos.

Some homes had no water at all while others watched it gush from burst pipes into their hallways and living rooms. In Galveston, where dozens had huddled on Monday and Tuesday in a county-run warming center, the newest pressing need was refrigerated trucks — to hold the bodies expected to be found in the days ahead. And on Wednesday more than 2.5 million people were still without power, while at least twice as many were being told to boil their water.

The onslaught of winter was far from finished. In central Texas, where many roads have already been impassable for days, another barrage of sleet and snow was expected late into Wednesday evening. The new storm was forecast to march toward the Mid-Atlantic, hitting parts of North Carolina and Virginia that are already laboring under the ice from the last storm.

In Houston, Catherine Saenz and her family, like most of their neighbors, have had no power or water for days, as the city remains in the grip of the fiercest winter in memory. But they are fortunate: They have a fireplace.

Even fireplaces have to be fed, though, and to keep the two parents, two daughters and two grandmothers from freezing, her husband has spent hours in the afternoon scouring the neighborhood for fallen trees and rotten wood.

“I never imagined that we would be in this situation,” said Ms. Saenz, who grew up in Colombia but has lived in Houston through Hurricanes Ike and Harvey. “No one is prepared, it is dangerous and we are very vulnerable.”

As the storm moved east, Duke Energy warned its customers in the Carolinas that there could be a million power outages in the days ahead. Maryland’s governor, Larry Hogan, gave a similar warning, telling residents to keep their phones charged and to prepare themselves for the coming snow and ice.

Already, at least 31 people have died nationwide since the punishing winter weather began last week. Some died in crashes on icy roads, some succumbed to the cold and others were killed when desperate attempts at finding some warmth turned deadly.

Across the country, homes were still without power — more than 150,000 outages in Oregon, 111,000 in Louisiana and 88,000 in Kentucky as of Wednesday afternoon — but nowhere was it as bad as it is in Texas. The Electric Reliability Council of Texas, which manages the state’s power grid, said on Wednesday that about 700,000 homes had electricity restored overnight but that more than 2.6 million customers were still without power. The Houston mayor’s office posted on Twitter on Wednesday that the power outages there would “likely last another few days.”

During a news conference on Wednesday, Gov. Greg Abbott said there remained a lack of power within the electrical grid. “Every source of power that the state of Texas has has been compromised,” Mr. Abbott said, from coal and renewable energy to nuclear power.

He signed an executive order on Wednesday directing natural gas providers to halt all shipments of gas outside the state, ordering them to instead direct those sales to Texas power generators.

W. Nim Kidd, chief of the Texas Division of Emergency Management, said several state agencies have been working together to meet the demands of nursing homes, hospitals and dialysis centers, which have reported a variety of problems including water main breaks and oxygen shortages. As another storm moves in, the state increased the number of warming centers to more than 300.

Water has also emerged as a major problem, with almost seven million Texans under a boil water advisory, and about 263,000 people affected by nonfunctioning water providers.

The crisis highlighted a deeper warning for power systems throughout the country. Electric grids can be engineered to handle a wide range of severe conditions — as long as grid operators can reliably predict the dangers ahead. But as climate change accelerates, many electric grids will face novel and extreme weather events that go beyond the historical conditions those grids were designed for, putting the systems at risk of catastrophic failure.

In a sign of just how fundamental the needs are in Texas, the Federal Emergency Management Agency has sent blankets, bottled water and meals, in addition to 60 generators, to help the state power “critical infrastructure” like hospitals. FEMA will also provide the state with diesel fuel “to ensure the continued availability of backup power,” Jen Psaki, the White House press secretary, said at a briefing on Wednesday.

“Our team and FEMA continue to monitor the situation in Texas, as well as other states in the storm’s path that might be impacted,” Ms. Psaki said. “We remain in close contact with states across the affected area to ensure any federal support requirements are met.”

Despite a hard-won experience with natural disasters like hurricanes, this was a whole new kind of misery in Texas, all the more distressing because it was so unfamiliar. Calls were coming into 911 and other law enforcement lines at three times the normal rate, said Jason Spencer, a spokesman for the Harris County Sheriff’s Office, from people desperately seeking advice about burst pipes, asking what the symptoms of hypothermia might be or just looking for some deliverance from the bitter cold.

Emergency workers, many leaving behind their own families in frozen and powerless homes, have had to respond to calls for assistance by navigating dangerously icy roads. Some of the direst situations will only be learned about in the days to come.

“We’re fully expecting that when things start to thaw out and people start checking on each other that we’re going to find some people who didn’t make it through the storm,” Mr. Spencer said. “We’ve responded to death calls, we’ve had suicides, we’ve had at least one homeless person who we believe died from hypothermia.”

But, he said, that is likely “just the tip of the iceberg.”

That disasters do not fall evenly on the rich and poor is a lesson Texans have learned from the past, and seemed to be no less true this week.

“I understand we live in a less-cared-for neighborhood but we’re human like everyone else,” said Justin Chavez, who had been living with his wife and eight children in a powerless home in San Antonio for days.

Since Sunday evening, his family had been gathering at night by the light of tea candles, cooking Hot Pockets on a gas stove and blocking the frigid drafts with towels shoved under the front and back doors. The children were exhausted. Mr. Chavez, 33, stood in the backyard on Wednesday morning watching his three dogs and a potbellied pig rummage in the snow. The four fish that the family kept had frozen to death.

“The city should have been on top of this,” Mr. Chavez said. “What am I paying my taxes for?”

People desperate for light and warmth have searched in vain for hotels, though many of the hotels are in the same straits — powerless, short on food — as the homes around them. And where there is power, rooms are nearly impossible to come by.

“I’ve been through Katrina, I’ve been through Harvey, and this is by far the worst I’ve ever seen it,” said Brent Shives, the assistant general manager at a Hilton Garden Inn in Austin, where front desk staff has faced a steady stream of desperate people seeking shelter. “I had to turn away a mother with her 7-month-old child. They had no power or water at home. I had to go back in my office and cry.”

In the absence of hotel rooms, there are the rooms of friends, neighbors and relatives.

Since the week began, three sets of families have moved in with Andrea Chacin and her husband in their small two-story home in the Heights area of Houston. They came because her house still had power. Under the circumstances, fears of Covid-19 just had to be shoved aside.

But then the water in Ms. Chacin’s house just stopped flowing.

So the eight adults plus one baby in her house are trying to manage, rotating bathroom visits, flushing with water collected from outside or from the dwindling reservoir in the bathtub. It was getting very tiring, she said.

“It’s not just you,” she said. “You’re still taking on everybody else’s situation around you.” Ms. Chacin talked of her grandparents, who are in their 90s and lost power in their house in the Houston suburbs. They were stranded by the icy roads, and so they slept on a couch in front of the fireplace.

“I think we have the right to be angry,” she said. “Why do you have to wait until things happen, and things go wrong.”

The Coronavirus Is Plotting a Comeback. Here’s Our Chance to Stop It for Good.

Across the United States, and the world, the coronavirus seems to be loosening its stranglehold. The deadly curve of cases, hospitalizations and deaths has...
Read more
The New York

A Recall for Newsom in California? Talk Grows as Governors Come Under Attack

Voters would be asked two questions: Should Mr. Newsom be recalled, and if the recall passes, who should complete his remaining year or so...
Read more
The New York

President Biden’s nominee for health secretary, Xavier Becerra, will appear before a Senate committee Tuesday morning, where he is expected to face tough questions...
Read more

Dad, a Death Sentence and the Planner Who Set Us Straight

My siblings and I had always gotten on quite well, but we feared a breakdown in overall family dynamics if we weren’t careful, even...
Read more

SEOUL, South Korea — The students and the survivor were divided by two generations and 7,000 miles, but they met on Zoom to discuss...
Read more
Load more

Dad, a Death Sentence and the Planner Who Set Us Straight

My siblings and I had always gotten on quite well, but we feared a breakdown in overall family dynamics if we weren’t careful, even...
Read more