How One Looted Artifact Tells the Story of Modern Afghanistan 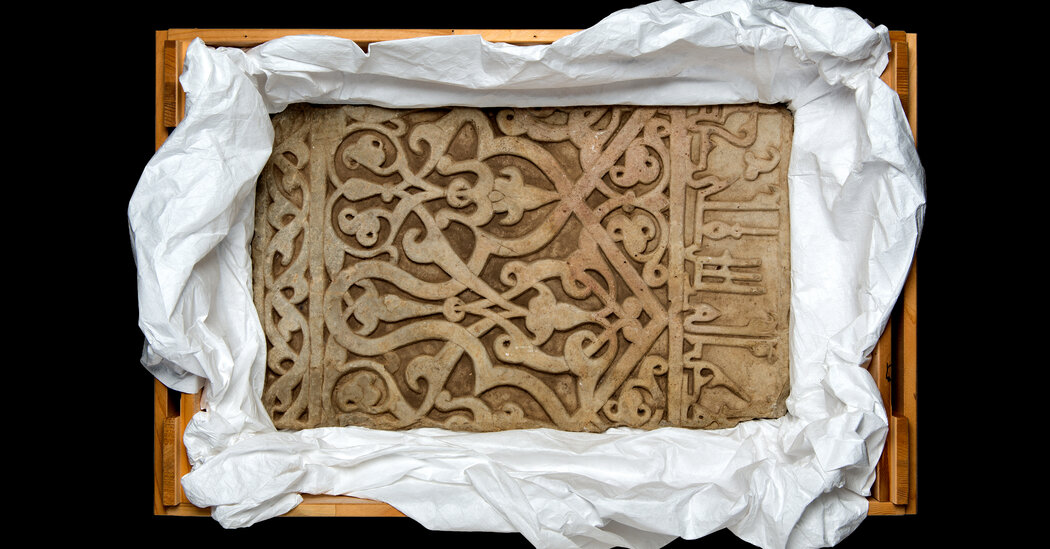 Then, in 1988, as the Soviets prepared to depart and it became clear that Kabul could fall to the mujahedeen, the museum staff hid some of the most important objects in government facilities closer to the center of town. The Bactrian Hoard, a collection of 2,000-year-old jewelry and weapons, was stashed in the depths of the presidential palace. The museum’s staff kept its secret for the next decade, successfully safeguarding the finest treasures. But there wasn’t enough space to move the remainder of the museum’s collection, including the Islamic wing.

One morning, Saifi and the others woke to a pillar of smoke rising in the distance. Fighting had broken out between two rival groups, and the museum was hit by rocket fire. An inferno raged on the top floor; in the galleries, metal and wood were reduced to heat, light and ash; stone cracked and shattered.

Not everything was destroyed in the blaze. Afterward, fighters in the area began stealing from the museum. “They went for the low-hanging fruit,” said Jolyon Leslie, who was working for the United Nations in Kabul. The museum’s coin collection, the remains of the Islamic gallery, and its remarkable Begram Ivories, delicate and portable, were all taken. At first, it was opportunistic: ragged, hungry men stumbling off with what they could carry. Leslie recalled driving past street sellers flogging items fresh from the museum, displayed among vegetables on a sheet of newspaper in the mud. “My God, that’s a Buddha, that isn’t an onion,” he realized. He’d stop and pay the equivalent of a few dollars, and take them for safekeeping.

But as time went on, the looting became more organized. Leslie was part of a group that tried to preserve what it could at the museum by welding iron bars onto the windows. The thieves came back with crowbars. One night, two massive schist reliefs in the entrance hall, which had seemed too heavy to remove, disappeared, presumably by truck. “There were anecdotal reports that the mujahedeen were in cahoots with Pakistani dealers,” Leslie said. Certainly, many of the museum’s looted artifacts turned up for sale across the border in Peshawar.

During the war, almost 100 Ghazni marbles, including the Hamburg panel, disappeared from the government’s possession. “The pieces that were missing were the big, complete pieces,” Rugiadi told me. Though we cannot be certain, it seems probable that the Hamburg marble ended up on the black market in Pakistan, which was awash with Afghan antiquities. During the ’90s, commanders and other wartime entrepreneurs invested in heavy machinery and labor to systematically excavate the richest sites. “That’s when you have the looting of sites across the whole country,” Simpson, the curator at the British Museum, said.

As tragic as the looting of the museum was, such illicit excavations were worse in an important sense, because they destroyed the archaeological record. At least we know something about the original site of the Ghazni marbles. But each illegal dig meant that information about the past was lost forever. Shorn of their connection to their sites of discovery, a rich stream of antiquities crossed Afghanistan’s borders, destined for world markets, many via the Persian Gulf, where the mujahedeen had well-established connections with wealthy patrons of the jihad.

According to the Italian database, the al-Sabah Collection in Kuwait holds four of the Ghazni panels taken from the Afghan government collection; others have ended up at the Institut du Monde Arabe in Paris, the Sharjah Museum of Islamic Civilization and the Islamic Art Museum Malaysia. The Sharjah Museum did not respond to a request for comment. Eric Delpont, director of the Paris museum, said that its panel was acquired from Hotel Drouot in 2003, and that the museum was unaware that it came from the Afghan government collection, believing it to be from “a mausoleum in the Ghaznavid capital.” Salam Kaoukji, the collection manager at al-Sabah, said that she was aware of their panels’ provenance but that she didn’t know if there were plans for restitution, adding that it was up to the governments of Kuwait and Afghanistan to decide.

A passenger train derailed Sunday north of Cairo, killing at least 11 people and injuring scores more, the Egyptian authorities said. It was the...
Read more
UAE

WASHINGTON — President Biden’s decision to pull all American troops from Afghanistan by Sept. 11 was rooted in his belief that there is no...
Read more
UAE

Iran Says It Began Enriching Uranium to 60 Percent. How Important Is That?

Iran has started enriching its uranium supply to 60 percent purity — the closest the country has ever come to the level needed for...
Read more