They Championed Venezuela’s Revolution. They Are Now Its Latest Victims. 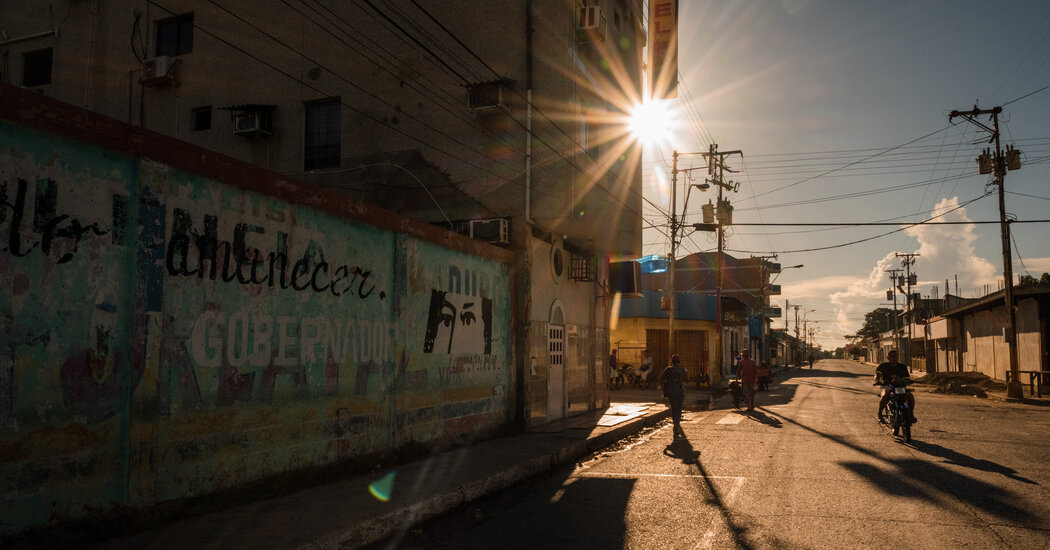 GÜIRIA, Venezuela — The host of a popular radio show, “The People’s Combat,” had always diligently praised Venezuela’s governing Socialist Party, even as millions sank into penury under its rule. But when acute gasoline shortages paralyzed his remote fishing town this summer, he strayed from the party line.

Just weeks later, on Aug. 17, four masked, armed men burst into Mr. Bislick’s house and told him he had “run the red light,” before beating him in front of his family and hauling him away into the night. He was found dead with gunshot wounds hours later, dressed in his favorite Che Guevara T-shirt.

Those responsible for Mr. Bislick’s death remain at large in the town of 30,000, where everyone knew of him, and of his lifelong dedication to Venezuela’s Socialist revolution. The Socialist mayor never spoke of the crime or visited the family, who said the killing had been politically motivated.

“Is denouncing wrongdoing so wicked that it should cost the life of a man who only wanted social well-being?” asked Mr. Bislick’s sister, Rosmery Bislick.

His death appears to be part of a wave of repression against leftist activists alienated by President Nicolás Maduro, who seems intent on consolidating power in parliamentary elections in December. The vote, boycotted by the opposition as a sham, could bring what used to be one of Latin America’s most established democracies to the verge of being a one-party state.

After having crushed the political parties opposed to his version of socialism, Mr. Maduro’s critics say, he has trained the state’s security apparatus on disillusioned ideological allies, repeating the path taken by leftist autocrats from the Soviet Union to Cuba.

Mr. Maduro’s office did not respond to a request for comment.

“Whoever makes any criticism is lumped with the opposition, the right, called a traitor,” said Ares Di Fazio, a former urban guerrilla and leader of the far-left Tupamaros Party, which was dismantled by the government in August after having voiced discontent.

Longtime government supporters who in recent months flooded the streets of provincial towns to denounce the collapse of public services have been suppressed by security forces. Public employees who denounce corruption are charged with sabotage.

Members of the ruling electoral alliance who decided to run as independents are disqualified. Those who persevere are harassed by the police or charged with spurious crimes.

The repression is partly an outcome of Mr. Maduro’s decision to abandon the wealth redistribution policies of his late predecessor, Hugo Chávez, in favor of what amounts to crony capitalism to survive American sanctions. The change effectively legalized Venezuela’s sprawling black market economy and condoned the pervasive corruption, creating a new economic order that benefited the military and business elites loyal to Mr. Maduro.

The result has been a jarring chasm between the official rhetoric, which blames the national collapse on sanctions, and the extravagant lives flaunted by the government’s cronies in supermarkets stocked with expensive imports and luxury car showrooms.

“For some, there’s blockade, for others — boutiques,” said Oswaldo Rivero, a prominent Venezuelan left-wing activist and national television host, who had for years stoked attacks on the opposition on his program.

Those who question this “are turned into sawdust,” said Mr. Rivero, who is now being called a traitor and threatened on social media for speaking out against corruption.

For the past two decades, leftist parties represented by activists like Mr. Rivero had helped Mr. Chávez, and then Mr. Maduro, stay in power.

But these allies grew increasingly disillusioned with Mr. Maduro’s authoritarianism and corruption. This year, for the first time, they decided to field their own congressional candidates.

Courts in August installed Mr. Maduro’s loyalists at the top of the Tupamaros and three other dissident parties.

The police arrested the head of the Tupamaros party, José Pinto, on unproved murder charges, harassed the leaders the Communist Party and briefly detained a veteran leftist, Rafael Uzcátegui, 73, on accusations he had visited a brothel. All defendants have called the cases political persecution.

Mr. Uzcátegui claims 37 members of his party, Fatherland for All, have been detained for campaigning against the government in the upcoming elections. Four of them merely sprayed on a public wall the words “Dignified Salary Now,” a plea to raise Venezuela’s minimum monthly salary, which is the equivalent of $2 in local currency.

“The government no longer fears the right,” said Mr. Uzcátegui. They fear the left, he said, “because they know we’re telling people the truth.”

A Communist Party activist, Isabel Granado, 32, decided to run for congress against the government in December, because she said it no longer represented the poor.

Two years ago, she and two dozen small farmers from her town of El Vigía, in the Andean foothills, decided to take over a plot of land, which she said the authorities had declared idle since 2010. They called their farming group “The Powerful Hand of God,” and began cultivating crops to feed their families.

The government had long endorsed such takeovers to win rural support and attempt to reduce inequality.

Suddenly, on Sept. 24, Ms. Granado said a black-clad special operations police squad burst into her home, threw her 9-year-old daughter to the floor and threatened to beat the activist in front of the child if she didn’t come with them. She was taken to a police station and accused of illegal land occupation and livestock rustling, a charge Ms. Granado denied.

She was released the next day for lack of evidence, but was detained again two days later, this time by military commandos. Ms. Granado said in her time in custody she was handcuffed, threatened with phony drug charges, and told she would be executed.

It was not an idle threat in a country where the United Nations investigators have implicated Mr. Maduro’s special operations police, known as FAES, in thousands of extrajudicial executions in poor neighborhoods in recent years.

“I was truly terrified, because apart from being a social activist, I’m also a mother,” said Ms. Granado. “The only thing I could think of were my children.”

Ms. Granado said that the timing, the brutality and the arbitrary nature of her detentions pointed to a desire by the local authorities to deter her from running for congress. She said she lives in constant fear, frequently changing safe houses.

But she said she would carry on her campaign.

“The people’s support for us is what hurts them the most,” she said, referring to the government.

After a tense calm brought by the pandemic, the popular discontent with Mr. Maduro’s government erupted in more than 1,000 flash protests in September.

Unlike the previous waves of unrest, the latest were concentrated in the poor rural states, which have long formed the ruling party’s base. The protesters, many of them longtime government supporters, demanded food, fuel and electricity rather than political change, according to interviews in four affected towns.

Mr. Maduro responded to discontent in the socialist heartland with the same repression applied to opponents. More than 200 protesters were detained in the September protests, and one person was shot dead by the police, according to the Venezuelan Observatory of Social Conflict, a nonprofit group tracking the disturbances.

“What they are doing smells to us a lot like dictatorship,” said Edito Hidalgo, a veteran Tupamaro activist who led a protest in the western town of Urachiche in September. “They have the power and they won’t let it go.”

Urachiche, a close-knit farming community, had overwhelmingly voted for Socialist candidates since Mr. Chávez was first sworn in, in 1999, promising to govern for the people.

“This is a revolutionary town,” said Mr. Hidalgo, who proudly recounted Che Guevara’s visit to Urachiche in 1962.

After enduring Venezuela’s worsening economic conditions for seven years, the town finally raised its voice in September. Thousands of residents peacefully marched to the town hall singing the national anthem to give the mayor a proposal for improving food and fuel supplies.

A band appeared from the multitude with traditional instruments — miniature guitars and maracas — capping the rally with an impromptu concert, said Mr. Hidalgo. “Then everyone went to their homes without throwing a single rock.”

A few days later, the FAES police pulled up outside Mr. Hidalgo’s house, looking for him. Alerted by his wife, he fled and spent two weeks in hiding, while security forces harassed his neighborhood.

“They had decided they must get rid of Edito Hidalgo because he’s preaching the Revolution to the people,” he said.

Polls show the Socialist Party is now supported by just one in 10 Venezuelans.

Back in Güiria, the family of Mr. Bislick, the dead radio host, are still waiting for justice.

After the armed men abducted Mr. Bislick, his family ran to the police station — their car, like most in town, was out of gas.

Instead of immediately undertaking a search, the officers spent two hours taking down their details, said his family. In despair, the family then ran to the ruling party’s office, where Mr. Bislick had worked for two decades, to seek spare fuel to help the search. They were denied.

A neighbor eventually discovered Mr. Bislick’s body in the bushes.

Mr. Bislick’s denunciations of corruption had grown so popular that residents blasted his program in the streets from their car speakers during blackouts, said his radio colleague, José Alberto Frontén.

“We were giving it hard on the program and we knew our punches were landing where they should,” said Mr. Frontén. “But we never saw that hit coming to us.”

Over the past few years, as the Trump administration imposed stringent sanctions on Cuba and the tourism industry was decimated by the pandemic, Cubans...
Read more
America

MEXICO CITY — Raúl Castro announced Friday that he was handing over leadership of Cuba’s ruling Communist Party to a younger generation “full of...
Read more
America

The Carpenter Who Built Tiny Homes for Toronto’s Homeless

TORONTO — On his way to work on a construction site, Khaleel Seivwright surveyed the growing number of tents lining an intercity highway and...
Read more